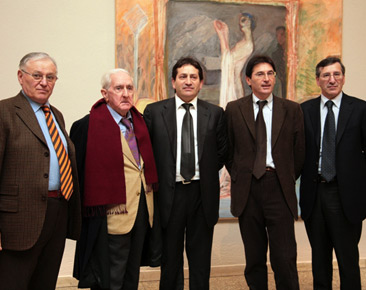 EUROMOBIL GROUP AND ART
Euromobil Group has invested heavily in the promotion of modern and contemporary art since 1982 as part of its advertising strategy. Motivated and supported by the personal passion and sensitivity of the Lucchetta brothers, Antonio, Fiorenzo, Gaspare and Giancarlo – owners of Euromobil (kitchens), Zalf (furniture) and Désirée (sofas) – participation became increasingly structured and more organized over time.

Projects overlapped as they became connected and integrated: from supporting exhibitions of contemporary artists to contributing to the organization of events of historic proportions and publishing ventures.

Their passion for art has resulted in the sponsorship of over 400 exhibitions in Italy and abroad hosted in some of the world’s most illustrious museums and galleries including: exhibits of Impressionist paintings in collaboration with Marco Goldin at Casa dei Carraresi in Treviso, Museo di Santa Giulia in Treviso and the Basilica Palladiana in Vicenza; exhibits of Kinetic art and Spatialism in collaboration with Giovanni Granzotto at Rome’s Scuderie del Quirinale, Saint Petersburg’s Hermitage Museum, the Guggenheim Museum Bilbao and the Moscow Museum of Modern Art. Other exhibitions like the “Drawings and Manuscripts by Leonardo da Vinci” were promoted personally and hosted at Venice’s Museo Correr, La Permanente in Milan, the d’Orsay and Louvre Museums in Paris.

Euromobil Group has been the Main Sponsor of “Arte Fiera” since 2007. This show is hosted in Bologna and is one of the most important events dedicated to art on an international level. The Group is present at a large area called “The Places of Art, the Places of Design”. It has also founded the “Gruppo Euromobil Under 30” International Award which is presented to a promising young artist at the show.

THE LUCCHETTA BROTHERS AND SAVERIO BARBARO
The Lucchetta brothers, constantly aware of importance attributed to Saverio Barbaro from critics and public institutions, have been supporting the artist for many years with a promotional plan to bring more visibility to his work. Among the artists whose works are held in high regard and staunchly supported by the brothers, Saverio Barbaro is certainly one of the most admired and included on the roster of Italy’s great contemporary masters. The Lucchetta brothers supported the creation of a website containing all necessary information for staying constantly up to date on promotional artistic initiatives.